Warm weather finally seems to be here and to get you ready we’ve got a ton of specials happening at the spa! Check out the offers below and head into the new season with a spring in your step!

Offers available at all clubs & expire 4/30/18, no two discounts apply – services must be received in April.

Offer available only at FFC Lincoln Park & expires 4/30/18, no two discounts apply – services must be received in April.

Offer available only at FFC Union Station & expires 4/30/18, no two discounts apply – services must be received in April.

Injuries can happen at any moment—at the gym, in the workplace, in your car or even in your own home. Without proper diagnosis and timely treatment, recovery can often become a slow and painful process.

With our  comprehensive programs and services and convenient hours and locations we can help return you to what you love doing best. Don’t forget NovaCare provides you with your very own physical therapist and athletic trainer! You can call or email them at 866.TRY.NOVA or injuryhotline@novacare.com.  Find a complimentary injury screen date during April at your nearest Fitness Formula Club – check out the schedule below!

Let’s talk about metabolic adaptation. Many of you have probably heard the term “metabolic damage”, which essentially refers to a metabolism that is not working “properly” or “efficiently” for the individual. However, your metabolism cannot really be “damaged”, so there is some controversy around this word.

Essentially, when the metabolism is in a slowed stated (examples would be eliminating carbs or a hypothyroid condition); it’s become that way due to factors that forced it to be there. Sometimes these factors are seemingly “out of our control” but more often than not these factors are our own doing.

So how does a slow metabolism occur? One of the number one culprits is fad dieting, such as eating low calorie or low fat foods for a prolonged period. When you drop your calories too low, the body eventually responds by slowing the metabolism down. This means it can be hard to drop body fat percentage, gain lean muscle, etc. This is how our system keeps us alive, so it’s definitely not a bad thing. If our metabolism didn’t slow down, we would starve to death much more quickly and easily. However, restrictive dieting typically goes hand in hand with yo-yo dieting and/ or binge eating behaviors. These behaviors are why so many struggle with being overweight while simultaneously having a non-optimal metabolism. The combination of gaining weight with a slower metabolism is exactly why so many people get stuck in a cycle of yo-yo dieting and feeling “trapped” like they cannot get out. Restrict/binge habits of overeating and slowing the metabolism more can cause you to gain more weight from a slowed metabolism, which continually repeats.

So how do you get out of this cycle? I was there once, with a metabolism that didn’t seem to work for me if I ate over 1200 calories a day. But today I am eating 2,700+ on most days. The key is REVERSE DIETING. This is why so many clients are put on a reverse diet, to get the metabolism working in their favor again. Reverse dieting is not only for weight loss, but can also help with muscle gain and fat loss.

Want to learn more about reverse dieting, or have other metabolism related questions? Set up a complimentary consultation with Sarah by emailing her at ssobtka@ffc.com!

Nothing goes better with a sweat session than a great playlist. Whether getting you into a zen zone or helping you pound out that last half-mile or set, music can really do wonders. Check out all of our playlists by visiting https://open.spotify.com/user/ffc_chicago! 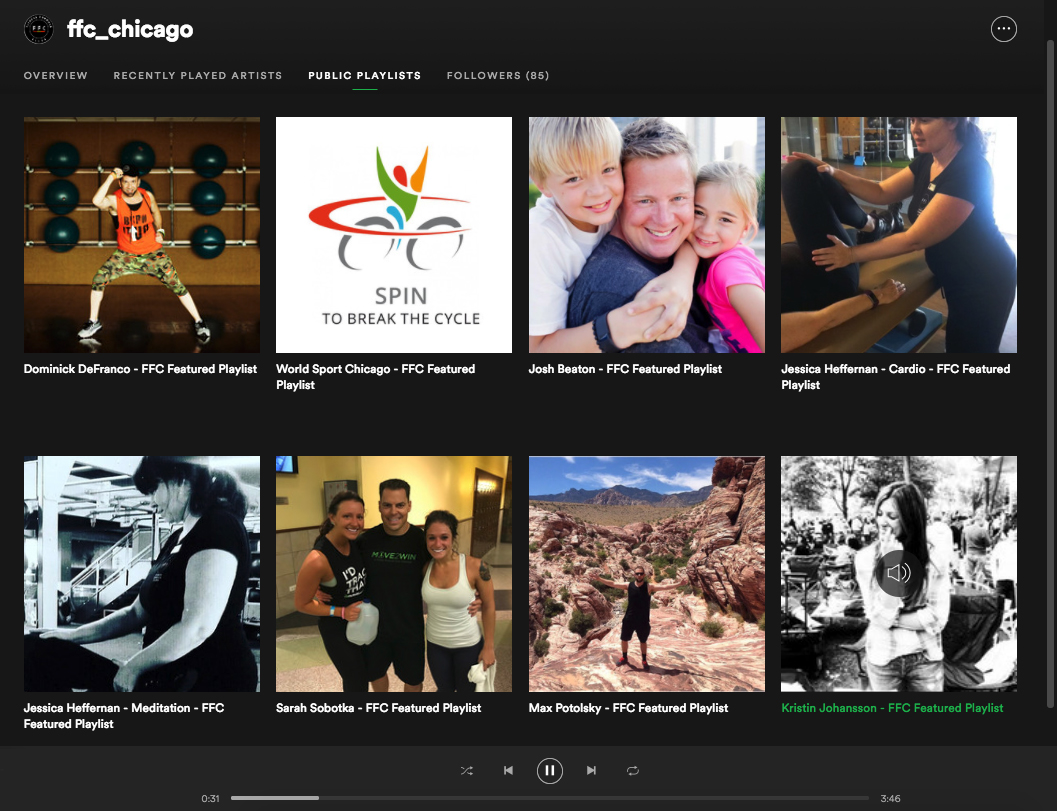 Love Zumba? Become a Zumba teacher or just learn the formula that has built the biggest dance fitness craze to hit the fitness industry with Zumba education specialist Jenna Bostic!

Join us on  Sunday, April 22 from 8 AM – 6 PM, for a Basic 1 training at FFC West Loop. For details and pricing, please visit www.zumba.com and search “trainings near you”!

Our classes at FFC Old Town are designed to be a fun and challenging way for children to learn valuable life skills and improve their fitness levels through the disciplines of Krav Maga. Students will not only learn how to defend themselves in any situation, but they will also gain confidence!

Take advantage of our trial offer and call us to book your first class! 312-474-0210 or email us at info@kravacademy.com.

Ride with TEAM TO END AIDS (T2) in the fourth annual SPIN TO END AIDS fundraiser on Sunday, April 22 at FFC Lincoln Park. SPIN TO END AIDS will host 100 riders raising funds and awareness on behalf of the AIDS Foundation of Chicago (AFC). Whether you are a T2 alum or curious about the T2 experience, enjoy music, friends, food, drink and swag!

Registration is only $18 and includes 2 studio spin sessions. Attend either or both of the sessions. A fundraising option is available and appreciated. Register online at http://events.aidschicago.org/site/TR?fr_id=1470&pg=entry

The FFC Endurance Training Center has been upgraded – come in and experience our new high intensity interval training for cyclists with the Sufferfest video workouts and then stay to recover in our Air Relax compression boots!

The new class schedule now features Sufferfest workouts on Mondays and Wednesdays, and Power Cycling  on Tuesdays and Thursdays! The spring schedule of classes is now available on the FFC app (sort by “category” endurance and “location” FFC Lincoln Park) or by clicking here: tinyurl.com/trimonster-calendar

Join the FFC Triathlon club! Contact endurance@ffc.com to get our FFC team discount code and save $10 off the Chicago Triathlon, plus get a free TrainingPeaks.com training plan to stay on track utilizing emails, a phone app, plus Garmin watch and Google Calendar integration!

The spring schedule of classes is now available on the FFC app (sort by “category” endurance and “location” FFC Lincoln Park) or by clicking here: tinyurl.com/trimonster-calendar